Horizontal Therapy (HT), is a worldwide patented therapy that can only be performed by devices manufactured by Hako-Med international based in Germany. 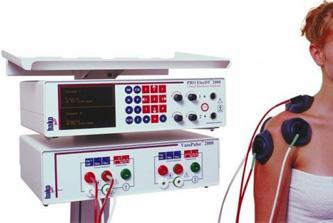 It is based on more than 40 years of research and development by one of the most renowned "Bio-Electrical Physicists', Dr. Achiem Hansjuergens, PhD. His development of HT has been tested and has had the benefit of undergoing dozens of studies in the United States, Europe, and Asia that have been published in reputable "peer reviewed" medical journals.

HT is a simultaneous combination of the biochemical and bioelectrical effects of current on the human body. It is based on the premise that bioelectrical changes in living tissues are closely linked with biochemical changes, and vice-versa. By applying one form of therapy having both effects, one obtains a synergistic effect via improved communication between the cells. This principal of functional imitation results in improvements in its therapeutic effect.

From the functional standpoint, the effects that are induced by HT in relation to symptomatic components of pathology are the reduction of pain, excess muscular recruitment, and improvements in range of motion (ROM) as an indirect effect of rigidity outside the joints and improves deficiency in motor functional activity as the result. HT has demonstrated the ability to increase ATP production within cells. This means increased energy production. Recent research has also shown that HT increases production of catalase, gluthathione and reactivation of Super Oxidase Dismutase which works to reduce dangerous free radicals resulting from cellular oxidation. Additionally, HT has shown to increase protein synthesis, tissue regeneration, bacterial destruction and improved immunomodulation. This accounts for many studies reporting a "permanent healing" effect as the result of HT.